Located in East Java, BNP is the most significant stronghold of the entire Black-winged Myna complex* and is one of two remaining locations where the Grey-backed Myna is still known to occur in the wild. It is home to the largest known coherent population of this taxa, estimated at a minimum of 50 birds in 2017 and no more than a few dozen in 2020, though very recent yet unpublished research suggests that the population size may actually be larger, ranging between 140 and 220 individuals.

Between April 2020 and March 2021, the study’s authors recorded a minimum of 19 Grey-backed Mynas offered for sale on social media. Sixteen different sellers were identified, suggesting that most of the sales were conducted opportunistically.

Considering the dire conservation status of Baluran’s Grey-backed mynas, any trade in wild-caught individuals should be considered highly alarming and must be countered as swiftly as possible.

“It is critical that songbird poaching in Baluran National Park is addressed urgently,” said Simon Bruslund, the study’s lead author, drawing attention to online trade advertisements of Grey-backed Mynas purportedly sourced from BNP. “Indonesia must use the tools it already has to intervene against the ongoing illegal capture and trade in Grey-backed Mynas from BNP”.

To further counter potential poaching activities, the authors encourage the establishment of a rapid reporting system through which observations or trapping, trading, and keeping of Grey-backed Mynas can be swiftly reported to the authorities, and the introduction of SMART patrols which has proven effective elsewhere.

This study is part of the Monitor Songbird Lab – a research cooperation involving the EAZA Silent Forest Group and the Monitor Conservation Research Society. 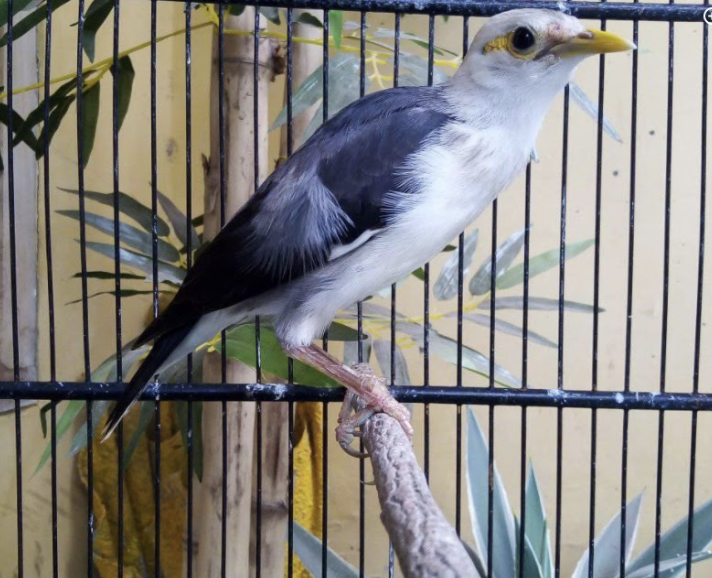 *The Black-winged Myna complex consists of three taxa that were previously considered to belong to a single species, each with their distinct morphological features: Black-winged Myna Acridotheres melanopterus from West and Central Java (white mantle and rump), Grey-backed Myna A. tricolor from East Java (dark mantle, white rump) and Grey-rumped Myna A. tertius from Bali (dark mantle and rump) (Vernia et al. 2018, Sadanandan et al. 2020). The population status of each species varies, with Black-winged Myna considered extinct in the wild since 2018, Grey-backed Myna previously estimated to comprise a few dozen individuals and Grey-rumped Myna consisting of approximately 200 remaining wild birds (Sadanandan et al. 2020). Recent research has reiterated the previous classification of three subspecies of the Black-winged Myna, after finding insufficient genetic divergence to justify full species classifications (Sadanandan et al. 2020). The study confirmed that morphological differences between the three Black-winged Myna forms were due to varying degrees of allelic introgression from the endemic Javan Myna A. javanicus, rather than signs of distinct speciation. However, in this paper we consider the three forms as separate species to match the BirdLife taxonomy currently used by the IUCN Red List Authority and the Indonesian Government. Sadanandan et al. however, did call for the three types to still be considered as separate conservation units due to different adaptations.